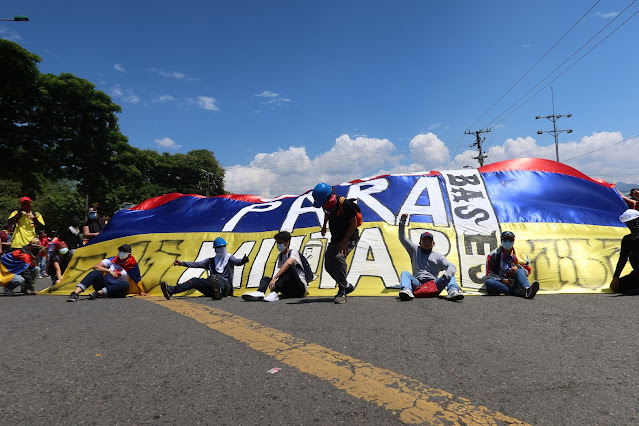 Cali, City of Colombia. - July 27th.- Colombian Antiriot forces -called ESMAD- launched a plan to attack all marches and people manifestations around this country on July 20th, Colombia Independence Day. The same day the questioned president Ivan Duque reports a false state of the nation in Congress while launching vast violent actions against its people.

City of Cali Police Commander, Juan Carlos León Montes, excuses excessive police violence by reporting an alleged plot to lunch a terror plan in Cali. He said, “community help” was the clue to the whole operation. Whoever, the community reports that these anti riots squads came straight just to dissolve the cultural (music, dance, and joy) gatherings.

I was reporting Live through Facebook (Nestor Cristancho) and a man in 5th Street begs Security forces to stop and leave the cultural expression in peace as it was. Squads respond with 2 tanks shooting stunt bombs to kids not older than 25 years old. Many are barely in their 20s. One of these children suffered a serious eye injury and another lost his teeth and has a severe jaw fracture. In total, 28 youth were injured and 7 arrested, according to police. This conflict in Colombia is a war that the Colombian state has declared against its youth, today called "First Liners."

I am an American independent journalist and I was well identified as PRESS. But for the third time, Colombian security forces try to stop my live transmission by shooting at me.

Cops shooters hit my arms with some sort of stun gun. It was aimed to reach and destroy my cellphone with I carried in a holder frame made to protect it to keep the Live transmission, the only way special forces and cops deter to attack the kids.

Last May 28th, cops stole my cell phone while transmitting the riots Live, showing how civilians protected by cops shoot at demonstrators.

Colombians have been on the streets for 85 days, almost 3 months. Protests expressed opposition against a corrupt and cynical government, even linked to drug trafficking, paramilitaries, all amid a dirty state war that has cost torture, disappearance, detention, and murder of young people by Colombian Security Forces and paramilitaries.

Colombian government does not listen to people's claims, but they also rejected and disrespected human rights reports, such as the Inter-American Commission on Human Rights where they denounce serious human rights violations by authorities.

The Colombian government controls the Congress and fundamental justice offices: the Attorney General's Office and other institutions supposedly created to protect people's rights and avoid corruption.

On the contrary, these institutions protect and create impunity for murderers and narcos such as former President Álvaro Uribe and many members of his political party openly involved in corruption, with ties to drug trafficking, and paramilitary massacres.

This kind of aristocracy-mafia governs Colombia.

And that’s why people are protesting on the streets. Especially young people, from 15 to 25 years old.

So far, president Ivan Duque responds quitting tax and health reforms and escalating the most violent reaction in history against the Colombian people.

This president presented the State of the Nation on Independence Day (past July 20th) describing a fantasy country. Meanwhile, on the streets, a clear plot against cultural demonstrations was launched by Colombian security forces.

This president Duque also presented a fake Police Reform which best effort is new uniforms that make it hard to identify cops.

Tired of being beaten, tortured, disappeared, and killed by Colombian security forces, The National Strike takes place in neighborhoods keeping the community fraternity built during these three months, plus arts and education.

There have been some negotiations with local authorities in every city. But, so far, there's no listening from the government. The only chance to change things in this Nation is through next year's congress and presidential elections. Unfortunately, Colombian State has records of doing fake elections years after years. In Colombia even dead people votes. 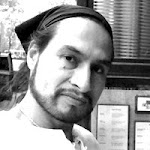 I am a storyteller. I carry a notebook, a camera, and perception. Every step is an opportunity to be better. To understand better by watching and listening.